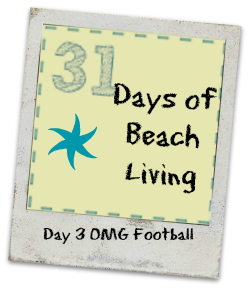 I write this post as a #momof3boys. Football and I have a shaky past. I have faked football fanaticsim in past relationships. Nothing like pretending to like a team for some random boyfriend. Girls out there— don’t pretend that I am speaking Greek. We have all done it for that one cute guy. I didn’t even understand the rules. I was even one of those girls who believed that “yellow line” on the TV screen was actually on the field for the players. Yes, it took a dear friend’s fiancé to inform me that it was added by the TV companies. What?!?

As a #momof3boys, I have tried to ignore football and the natural testosterone driven need of all little boys to play football. That fantasy has come to a very dead end. It all began when a few certain ladies from my CrossFit Chronic family insisted that I could join an indoor flag football team. It of course did not end well for me. I didn’t even make it to the first game of the season. Broken knuckle and finger stopped my budding football career. Fast forward to the present. How do you say “No” to your son who wants to play football for the first time? My argument that the Green family doesn’t play football flew out the window. I might not have been good at it, but I did play briefly. Dang, broke my own rule! Now we are 2 1/2 months in to a 125lbs tackle football league with the oldest Green boy.

This #momof3boys has spent 4-5 days a week watching said oldest Green boy practicing, drilling, conditioning and playing football. And yes, I am that #momof3boys that yells and screams, jumps and cheers, and takes numerous pictures of her boy playing said sport(s). Most of the time <according to oldest Green boy> I don’t yell the right things, but I am getting better. I know what specialty teams are now. I know what that “yellow line” meant. It is the first down marker. I know what a fumble is now. I know what conversion points are and why they do them in this league. I know the rules. Ugh!

But, my biggest confession is… I kinda like football. No faking here. You may even witness me sitting on the couch watching football with all the Green boys on Sundays.

But, every now and then, I wish they would just surf, so at least I could get some sun and sit on the beach. 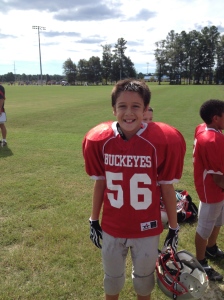 What I’m Posting About

"Do not wish to be anything but what you are, and try to be that perfectly." Saint Francis De Sales
MidwifeThinking

The Essentials of Essential Oil Education

A WordPress Site
The Lemon Drop Lounge
The XFit Midwife

Dotal Anecdotes: Life as a Wife